I am looking at meadows in a new light. Not sure if it’s because it seems to be such a bountiful year for wild flowers or because my wife started mowing paths through the fields so she could continue to walk the dogs.  When grass and wild flowers get so tall, it becomes impossible, or at least very difficult to navigate a way through with the dogs.  Thinking ahead, and with  the help of a riding lawnmower she made double wide paths through different flowering meadows and I have to say it’s been great for viewing the incredible display of abundant wildflowers.

This could be the result of an unusually long cool rainy spring with no late frosts. But, I suspect it has something to do with the fact when we purchased the surrounding fields three years ago from the farmer, we asked him to stop using Round-Up. Round-Up is a systemic weed killer that is banned in many states, but not yet in New York State.  Farmers tend to use it to eliminate “weeds” and yes that included wildflowers.  The fields are still hayed and so there are just a few weeks to enjoy the wildflower display. The birds that nest in the long grass, Bobolinks return each year and build their nests on the ground of open meadows and there is a mad rush to raise their chicks before the farmer takes his first cut.  The males are dressed in what looks like a tuxedo, but with the white shirt worn on their backs.

In this photo the perennial Sorrel- Rumex Acetoseller is the wide red swath in the meadow.

What can we learn from observing meadows and how can we apply that knowledge to create something equally beautiful in our own gardens?  First of all, Mother Nature likes to repeat the same plants through large areas. It doesn’t matter where you look: forest, mountains, beach or along the interstate, plants are repeated.  At any given time in the meadow there are two to six plants flowering at the same time. In June, the fields are still full of buttercups, but now common vetch (bluish purple) Daisy, Bedstraw (creamy white) and Red Clover are starting to flower.  In amongst these flowers are meadow grasses and several beautiful native grasses which I have yet to figure out what they are called.  Each of these wildflowers is repeated across the whole meadow in large organic cloud like- shapes. That cohesion and repetition is what is so pleasing, nothing jars, everything flows one to the other again and again.  Taking a cue from Mother Nature, I have left un-mowed areas in my garden where there are difficult slopes to mow. The only maintenance is cutting back the area in the fall with a Weed Whacker to spread the seeds for next year’s display. It’s a perfect design solution because I don’t want an overly manicured garden- it would not fit with the rural setting.  Integrating the wildflowers into the garden helps merge the wilder parts of the landscape with the tamer parts of the garden. 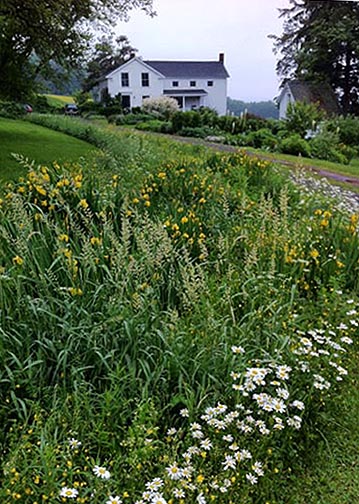 I have used the idea of repetition in every garden I have designed from roof top terraces to gardens that encompass many acres. It does not have to be one plant that is repeated, it can also be the same color of different flowering plants that is repeated which adds a textural element that can be very beautiful and interesting.  See photo of the Moon Garden which is primarily planted with white flowering plants, variegated and silver foliage plants. I have planted the native Flag Iris – Pseudacorus throughout parts of the white garden and around the pond to tie the planting together. The repetition of white flowering perennials and variegated foliage mimics the meadow plants in that the planting is cohesive- not jarring!

I like the idea of having areas that have their special time and take the center stage in the garden. I do not want borders that are constantly in bloom, instead I prefer more intimate “rooms” in the garden that like meadows have their season and are then quiet.

The Dutch garden designer, Piet Oudolf, has made a style of gardening
based on meadows. His work can be seen in Battery Park in NYC.
Check out his web site:  http://www.oudolf.com/piet-oudolf/gardens

Gallery | This entry was posted in Meadows and tagged how to make a meadow, natural meadows, wildfowers in the meadow. Bookmark the permalink.