The first time I had heard of planting a single-color garden was when I read a book about the White Garden at Sissinghurst. British novelist and poet Vita Sackville-West and her husband, diplomat and author Sir Harold Nicolson, designed and planted the now world-renowned gardens at Sissinghurst in Kent, England. Originally conceived as a rose garden in 1931, it was turned into the “White Garden” in 1949-50, planted in silver, green and white. Nicolson was brilliant at laying out the structure of the Sissinghurst Castle Garden and his wife had an incredible sense of combining plants.

Prior to the Sissinghurst White Garden, British garden designer, writer and artist Gertrude Jekyll made several mono-color gardens, including blue and grey. In contrast to the Sissinghurst garden, when Jekyll made a mono-color garden she was never rigid. A painter, she knew the value of adding the occasional blue or soft yellow flowering plant to enhance the white flowers. White gardens have their place in garden history, and I have to say that after three years of having an area in my garden that is “white” it is one of my most favorite areas to be in.

I call my white garden “The Moon Garden.” My wife and I frequently walk the “policies” as she calls it [a Victorian expression for walking the grounds] after dinner or before going to bed. The white, silver and variegated plants glow in the moonlight. In spring, when not much is flowering, the moon garden’s foliage is also pleasing, a planting scheme which balances and repeats the deep green and grey, and variegated foliage knits the planting together. Of course nature will always try to take back this forced scheme and there is now a Forget-me-not that appeared this year in the middle of a feathery fern on the edge of the white border. Like Jekyll, I am not going to be rigid because the soft blue flowers seem right and also the fern has never looked happier, using the Forget-me-not to grow through and be supported by.

I came across a book called The Moonlight Garden: New Discoveries at the Taj Mahal edited by Elizabeth Moynihan who was a nearby neighbor of ours before her husband, Senator Daniel Patrick Moynihan, died and she sold their place. I wish I had known about this book when she still lived down the road because I might have plucked up the courage to meet her. Mrs. Moynihan had lived in India when her husband was the U.S. ambassador to India. She was part of a group of American horticulturists who helped uncover the lost garden of the Taj Mahal. Before the restoration if you looked straight across the Yamuna River from the Taj pavilions you would see what appeared to be farmers’ fields. However, historical references, paintings, and more recently satellite photographs revealed that this area was once surrounded by a large wall that completely enclosed a beautiful garden that was a continuation of the gardens back across the river.  This walled garden was known as “The Moonlight Garden” built by the first Mughal emperor Babur (1526-30); inside the wall were extensive pools, fountains and water channels. It was a sumptuous pleasure garden, one very different from the more formal garden in the Taj enclosure.

Moonlight gardens were a tradition enjoyed by Indians before the Mughals. During the excessive heat of the day these gardens were a refuge of cooling waterways, fragrant blossoms and trees. Over time Babur’s moonlight garden was covered over by the silt of the Yamuna River. Satellite photos revealed ghostly formal lines of the original gardens. To date I don’t think these gardens have been restored, but much of the beautiful ornamental stonework was removed and saved from further deterioration.

In writer/gardener Eleanor Perenyi’s wonderful book Green Thoughts she writes about how white gardens were the rage in the 1920s and ’30s in England and the U.S. There was also similar enthusiasm for white rooms here. This non-color fascination with rooms and plants was considered a highbrow aesthetic choice. Perenyi explains that historically in the 1800s in England there was more of an emphasis on the scent of plants than we have today. Most of the plants that had heavy perfume were white flowering and came from warmer climates. These white flowering plants were usually kept in hothouses or glass houses. Tuber roses and gardenias were among the most cherished. The early plant collectors were from the upper classes of English society and Perenyi believes there was an association made that all white flowering plants when designed as a single-color garden are considered refined and even a little snooty! 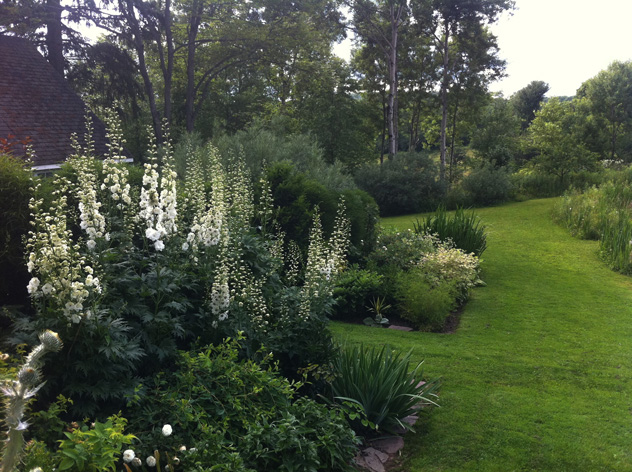 English delphiniums in the Moon Garden

Now, in 2011, I think things have changed a bit. There are so many common plants that have been hybridized, like the purple Echinacea-coneflower that is now widely available in many white forms. The wild meadow plant Astrantia was taken out of the meadows of Europe and put into garden borders and is also widely available. When I think about my particular selection of white plants they are as common as mud!

Nicotiana Sylvestris in the Moon Garden

Shrubs include: Aesculus parviflora, Cornus sericea ‘Silver and Gold,’ Cotinus coggygria ‘Golden Spirit,’ Exochorda macrantha ‘The Bride.’ I also add the annual Nicotiana alata ‘Fragrant Cloud,’ Nicotiana sylvestris, and Nicotiana alata ‘Lime Green.’ The Nicotianas (tobacco plant) are the most fragrant at night in order to attract the moths that pollinate them. Although in this climate they are an annual, once planted they magically reappear each summer.

Grey-color foliage is an asset in a white garden. The soft leaves of Stachys ‘Helen von Stein’ (Lamb’s ear) or the willowy grey foliage of Artemisia ‘Silver Mound’ simultaneously set off and ground the bright white flowers. I also like to use the occasional Scotch thistle which has a large grey leaf and I allow the small purple flowers because the foliage is such a bonus to the garden! It reaches a great height of 6 to 8 feet. Variegated foliage also adds light to the white garden. One of my favorite variegated shrubs is Cornus sericea ‘Silver and Gold.’ As there are so many variegated plants to choose from you can hardly go wrong.

I find it much harder to find plants with deep green foliage. This color is important because it is what provides depth and contrast against which the light variegated foliage and white flowers can gracefully float. I repeat the perennial Astrantia ‘Snow Star’ and Echinacea purpurea ‘White Swan’ because both have nice deep saturated green leaves. In early spring the European meadow plant Astrantia appears as fat green mounds which give a nice structure to the garden.

In a garden I prefer smaller, more intimate spaces that don’t try to look good throughout the year.  They have their season and you look forward to that time when they are at their most beautiful.

Whether you decide to make a white colored garden or not it is worth it to include some of our more fragrant white flowering plants into the border: Philadelphus lewisii, white roses, Daphne, Magnolia stellata, Syringa (Lilac), Nicotianas, Phlox, liliums and lily-of the valley, just to name a few. To view photos of plants- click here.

2 Responses to Moon Garden Room – an update of images