I have been admiring willow structures in books for the past decade, but had yet to make the leap of attempting to make one of own. All that began to change when last winter a friend sent me a link to a new willow nursery located in Northern Vermont. Impressed with the sheer number, variety and spectacular colors of willows being grown there, I became consumed with all things willow. I contacted the owner, Michael Dodge, and several dozen emails later, I invited myself to visit his nursery.

Originally from the Lake District in England, Dodge gardened with his mother as a small boy and got the gardening bug when at age eight he sent for a mail order offer of shrubs that included mock orange, Weigela, Spirea, deutzia, and forsythia. His passion for plants led him eventually to train at Kew Gardens, which houses the world’s largest collection of living plants. Dodge thrived at Kew and was top theoretical student and number one in plant identification, no small feat when you consider the thousands of plants at Kew. He immigrated to the U.S. in 1964, arriving on the Queen Mary.

His first job was to be in charge of the orchid collection at the New York Botanical Gardens.  After that he worked for Henry Francis du Pont at Winterthur Garden in Delaware, and after Mr. DuPont’s death he moved on to White Flower Farm in Litchfield, Connecticut. At White Flower he worked with a community of plantsmen under the direction of founder William B. Harris. He wore many hats there during his long tenure of 26 years: propagator, greenhouse manager, chief horticulturist, new plant research, catalogue director & designer, and during most of his time there he was the principal photographer. As the business grew he traveled throughout the U.S.A., Canada and Europe to find and photograph new plants. A fellow plantsmen said of Dodge, “He changed the face of American garden catalogue photography.”

Visiting Montreal Botanical Garden in 2006 Dodge saw several living willow structures. Inspired by them, he decided to start his own willow nursery by collecting willow cuttings from nurserymen, private and public gardeners from far and wide. He visited some of the more established willow growers in England including Windrush Nursery near Exeter, Devon, West Wales Nursery near Haverfordwest, Pembrokeshire, Phil Bradley near Cockermouth in the Lake District, and Wonder Tree near Bristol. He discovered how generous willow growers are with their time and knowledge, and from them learned how easy willows are to grow, how best to propagate them, and which are used for specific purposes, such as living and dried willow projects.

It was early April and bitterly cold when I drove to Fairfield, Vermont. Dodge had cut some black willow rods that we had planned to use, to make into a fedge structure about 8 feet long by 5 feet tall with a traditional diagonal pattern. A fedge is part hedge and part fence, hence the name. Not long into our project we were forced inside by the cold. By the warmth of a wood stove, I asked Dodge what he would like people to know about willows and he was off to the races!

Fedge a living fence before it leafed out

He explained, “Most people only think of large weeping willow trees that shed their branches and twigs and are messy weed trees that are invasive. Though reported to be invasive, actually very few willows are. Willows come in a wide range of sizes, shapes, leaf and stem colors, with varied habits. There are large trees and modest trees, shrubs and ground-hugging alpine varieties. Willows have attractive flowers from February onward. There are pink, green and black pussy willows as well as silver and buff. The colorful male catkins come as small as a quarter-inch and as large and brazen as 2 to 3 inches. Ornamental willows have wonderful stem color from jet black, dark red, golden yellow, orange, scarlet, gray, jade, and bright green for use in indoors or outside displays. Willows make great hedges, screens, wind and snow breaks. Along several interstates in upstate New York, shrub willow was planted along highways to stop the blowing snow and the effect has been a cost savings by reducing the amount of snow removal required. Willows are used in river and stream erosion control and some varieties are used as barriers to deer because they find the foliage unpalatable. They have many different uses in both living and dried utilitarian objects, such as baskets, coffins, plant supports, biodegradable compost bins, objets d’art, and garden sculpture. They are a great source for bees because willows flower at a time of year when little else is in bloom. Willow honey is one of the most flavorful of all.”

After establishing his collection of willows of over 150 species and cultivars, Dodge began offering dormant cuttings from his plants in early spring. They are the easiest of all trees and shrubs to propagate and dormant cuttings from 10 inches to 25 feet will root vigorously! Alpine and arctic species of willows are trickier to propagate and grow; these are mostly grown by specialists.  If you’re interested in building large willow structures, starting your own willow collection is the least expensive route to go; but if you’re impatient you can order larger willow rods for your project from Dodge. The ideal time to plant willows is when forsythia is in bloom and for me that was in mid April.

By the time I left Vermont, my car was stuffed with hundreds of willows. Arriving home I put the live willow in buckets of water in an outbuilding. In one of the willow books I own I had been admiring a living willow tunnel made for children. I recently got chickens and the run is exposed to the sky with hungry hawks hunting overhead. I thought a similar structure would be perfect for “my girls” to escape into and also to provide shade during summer’s hot days. I set about making a series of tunnels that form a circle for my chickens by digging two 10-inch deep circular trenches and planting both ends of the willow about 8 to 10 inches deep, spacing the willow rods 8 inches apart. When bending the rods to make the hoops I had to be careful not to snap them. It took a while to get the hang of it and I ended up snapping about 20 of them. When ordering rods you may want to order extra if making hoops! I planted the 10 inch cuttings above my house in what is called the wet field-sedges where other water-loving plants grow abundantly. It will take three years before the cuttings are producing substantial 10- to 16-foot rods. Dodge recommends cutting them back to 1 to 2 inches in late winter to get more and stronger shoots. 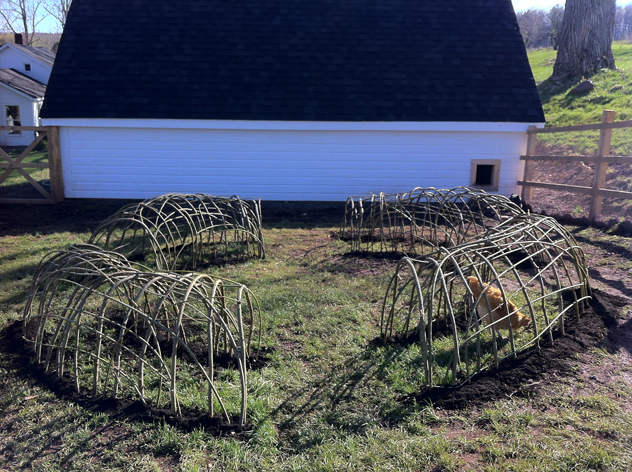 willow hoops for chickens before willow leafed out

willow hoops leafed out- but chickens have pecked at the new growth from base.

I purchased about 12 additional varieties of willow for the different structures I plan to make in the future. For tall living willow structures, 10 feet or more, Dodge suggested Salix schwerinii and Salix koriyanagi ‘Rubykins,’ a Japanese willow, for the weavers. I decided that ‘Rubykins,’ with its especially fine beautiful tapered leaves, would be a perfect variety for making a fedge in my own garden one day and so I bought extra. There are many ornamental willows that have spectacular stem color that will be great in the winter garden. It was hard to chose, but I ended up getting Salix alba ‘Flame’ for its deep red stem color, Salix x rubens ‘Basfordiana,’ with very bright orange-yellow stems, Salix alba var. vitellina for bright yellow stems, and Salix daphnoides ‘Continental Purple’ for its black stems to make wattles. A wattle is a living, permeable barrier made of willow stems set into the ground with willow branches woven around the stems. They are often used to frame and enclose garden beds or along stream banks to stop erosion. You can see them at The Cloisters Gardens in New York City where they enclose the rectangular beds. 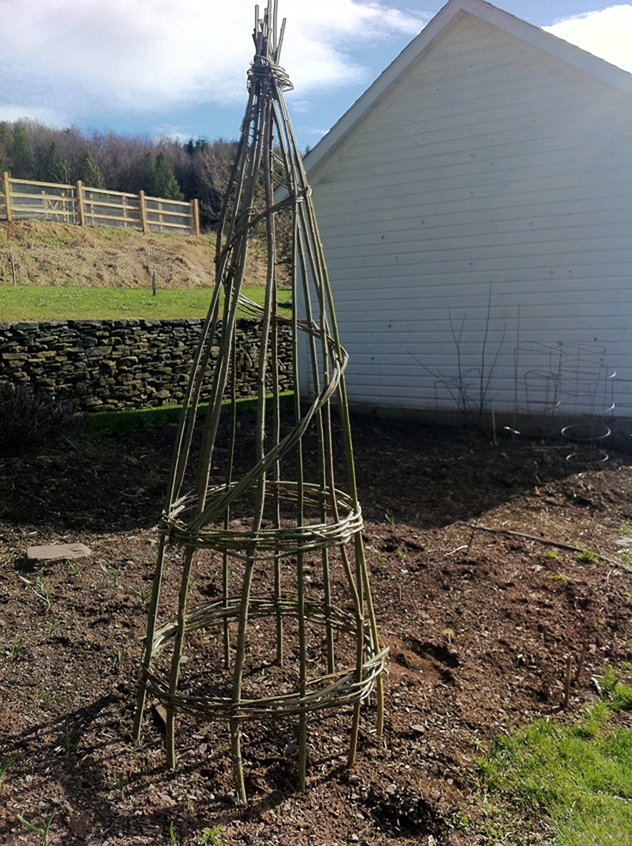 In late May, I had the opportunity to help my friends Liz and Richard make a willow chuppah for their daughter’s wedding. Richard is a sculptor and made a metal armature in the shape of a dome. Once the galvanized structure was erected by their pond, Liz and I set about first making one-foot holes for each willow rod and then began weaving the weavers in a diamond pattern onto the armature which took about three days. In a few weeks the willows leafed out, covering most of the armature. It will take another season and training of the willow to completely cover the 10-foot high dome.

Part of my exploration of willows led me to discover the Woody Biomass Program at SUNY-ESF at Syracuse that has been researching shrub willow since the late ‘80s for biofuels and chipping for direct burning. The crop is many times cheaper than growing corn for the same purpose and environmentally much “greener.” Willows can be cropped every third year for at least 27 years. That means not planting every year, never fertilizing unlike corn, and no losses due to inclement weather. These vigorous hybrid willows love our northeast climate and do exceptionally well here. There are NO genetically modified willow varieties, therefore no dependency on big chemical companies. The Scandinavian countries are way ahead of the U.S.A. in this area. I watched an online video about the work going on at Colgate University that is already growing 200 acres of hybrid willow and using the chipped willow as a fuel. It reported saving a million dollars a year on fuel costs. A few other universities in the northeast are following this lead.

armature of chuppah- first of the willow rods planted

You can see by now just a few things you can do with willow. There is a Facebook group called “Wonderful Willow” with over 400 subscribers worldwide. The majority of the members are basket weavers, but many members are also making many interesting living structures. I have only scratched the surface here of what can be done with willow, but I will be writing more about this incredible plant and my future willow projects. The best part is that we now have a leading horticulturist, Michael Dodge, who is growing and offering hundreds of willows for sale within the U.S. He is a treasure for us plantsmen and gardeners and I hope you will check out his website:  here

Leave a Reply to Deirdre in Seattle Cancel reply