The Allure of Viburnums

I have planted more viburnums than any other species of shrub in my garden and this is why: besides having attractive foliage, viburnums offer showy, often fragrant flowers, and the majority have beautiful fall color and fruit that appeal to the eye but also attract wildlife. Designing garden rooms that have “two seasons of interest” is a love of mine and these beautiful shrubs fit that requirement. Most ornamental shrubs  have the one season, but viburnums come alive in midsummer and in early fall give a second showing of beautiful fruit just as the other plants are giving up the ghost. The doublefile viburnums, especially, offer a beautiful aesthetic to the garden with their horizontal branching. Viburnums are as versatile as a shrub can get: trees, shrubs, evergreen, semi-evergreen, deciduous, large (60 foot) and small (3 foot); the flowers, white (most), pink, fragrant, smelly,  no discernible odor; the fruits, yellow, orange, red, blue, purple and black. If you can’t find at least one you like then seek out professional help! 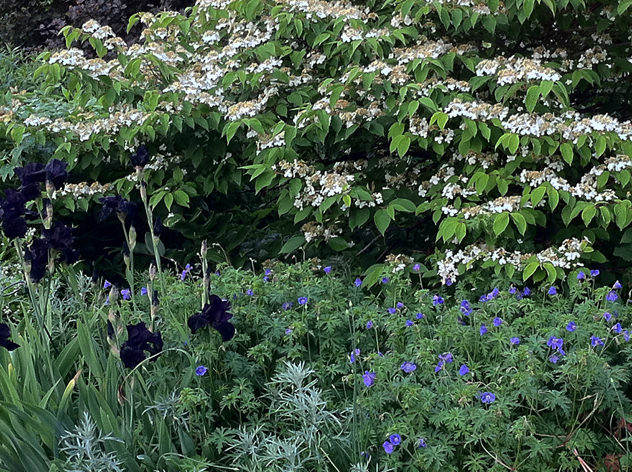 Viburnum ‘Snowflake’ in flower in June 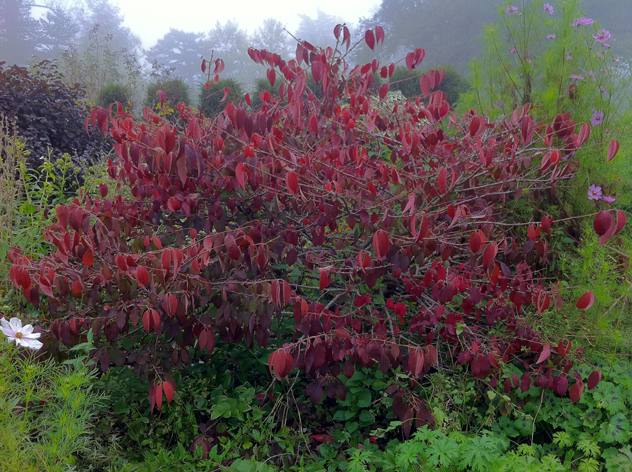 After researching viburnums for 25 years, Michael A. Dirr wrote a fantastic book on the species, Viburnums: Flowering Shrubs for Every Season (Winkworth and Donohue, 2005). He divided the species into 12 sections. There are approximately 20 species native to North America and 250 species in cold- temperate to semitropical climates. I read an article on viburnums that was written 10 years ago prior to this book which listed only 150 varieties. Now that plants are molecularly analyzed that list has nearly doubled.

Viburnum is a great shrub to plant singularly as a specimen or in a mass to make a bold statement in a larger landscape. Here is a selection of the viburnums that thrive in the Catskills and that are available from some of our local nurseries. I focus on varieties most resistant to the viburnum leaf beetle.

The viburnum leaf beetle, Pyrrhalta viburni (Paykull), is an invasive, non-native beetle that first appeared in New York along Lake Ontario in 1996. It has steadily spread but is being monitored by Cornell University. A voracious eater it can defoliate viburnum shrubs entirely and most plants die after two or three years of heavy infestation. At the end of this article I list viburnums ranked by vulnerability to the beetle based on observations at the VanDusen Botanical Garden, Vancouver, BC, Canada, by Carolyn Jones. The good news is we do not have to be put off planting all viburnums because there are a couple of dozen varieties that are resistant to the beetle and worth planting.

Fragrant viburnums: Viburnum carlessi (Korean spice), is considered one of the most fragrant viburnums in zone 4 to 6. The habit is rounded, reaching 4 to 8 feet high and wide. The flowers are pink to red budded, and open white flowers to 2 to 3 inches across. Carlessi has been crossed with other species to come up with new cultivars, such as the  smaller variation called Viburnum carlessi ‘Compactum,’ introduced by Hoogendron Nurseries in Newport, Rhode Island, in 1953. ‘Compactum’ stays small at about 3 to 4 feet and is perfect for smaller gardens. The other fragrant hardy viburnum is Viburnum x juddii (Judd). Michael Dirr thinks it is superior to V. carlessi, probably because it is resistant to leaf spot and bacteria. Judd viburnum is a cross between V. carlesii and V. bitchiuense with the best features of both parents. The hybrid was raised in 1920 byWilliam H. Judd at Arnold Arboretum. It has proven to be one of the best fragrant hybrids. I plan to plant one in an area I frequently walk by. A good cultivar is Viburnum x burkwoodii ‘Mohawk’ and it is in the top five of the fragrant viburnums growing to about 7 to 8 feet tall and wide. It is another carlesii cross with V. x burkwoodii. It would look great planted either in a flowering border or planted in a wilder area of the garden. Abundant flowers average 3 to 4 inches across and the nice glossy foliage turns orange-red in autumn.

Large-growing viburnums: Viburnum dilatatum (Linden), native to Korea, China and Japan, is one of my top five viburnums and I’ve created a ‘room’ with ten of these. This viburnum really stars in autumn with its lace-like cloak of red berries that drape over the dark green foliage. The habit is variable, upright, arching to dense and rounded, reaching a height and width of 8 to 10 feet. The flowers, 3 to 5 inches across, open in June here in the Catskills and are stinky, so it’s best to put it off in the distance. As the fruit is unpalatable to birds the display of red berries will persist into winter. A good smaller cultivar is V. ‘Cardinal Candy,’ which I massed in a planting of six shrubs on a slope along the driveway entrance to my house. ‘Cardinal Candy’ grows to 5 to 6 feet and is hardy to zone 4 and has survived a  minus-30 degree winter. It’s also deer-resistant.

Some other excellent cultivars that are slightly larger shrubs I have seen for sale locally are ‘Catskill,’ ‘Erie’ and ‘Iroquois.’ Linden viburnum are moderately susceptible to the viburnum beetle, which means they are low on the list.  Another large variety and very resistant to the beetle is V. setigerum (tea viburnum), which is known for producing perhaps the best fall fruit display of the any of the viburnums. It is a rounded, multi-stemmed, upright-spreading, deciduous shrub that typically grows to 8 to 12 feet tall and 5 to 8 feet wide. Mature shrubs tend to lack foliage at the base so it’s good to plant at the back of a border. Small white flowers arranged in flat-topped clusters (cymes to 2 inches wide) bloom in April to May; although the flowers are not particularly showy, bright red berries appear in abundance and cause the stems to arch gracefully downwards. The foliage turns purplish in fall and the leaves were once used to make tea, hence the common name.

My wife and I visited a wonderful nursery, Helderledge Farm, near Albany in Altamont, New York. My wife, who grew up with a mother who gardened, recognized Viburnum sieboldii growing in the display gardens. This is a large species, 15 to 20 (30) feet, and makes a reasonable tree, but it is most often grown as a multistem shrub. When the woman at the nursery told my wife to crush one of the leaves,  instead of smelling the green pepper smell the plant is attributed with, my wife detected the smell of skunk! Regardless, the large shrub is breathtaking and I bought one. The flowers smell of lemons making up for all other possible smells. Native to Japan, the shrub is reported to grow abundantly around Mount Fuji and I will always think of that when I look at this beautiful plant. This viburnum is on the list of most resistant to the viburnum beetle. 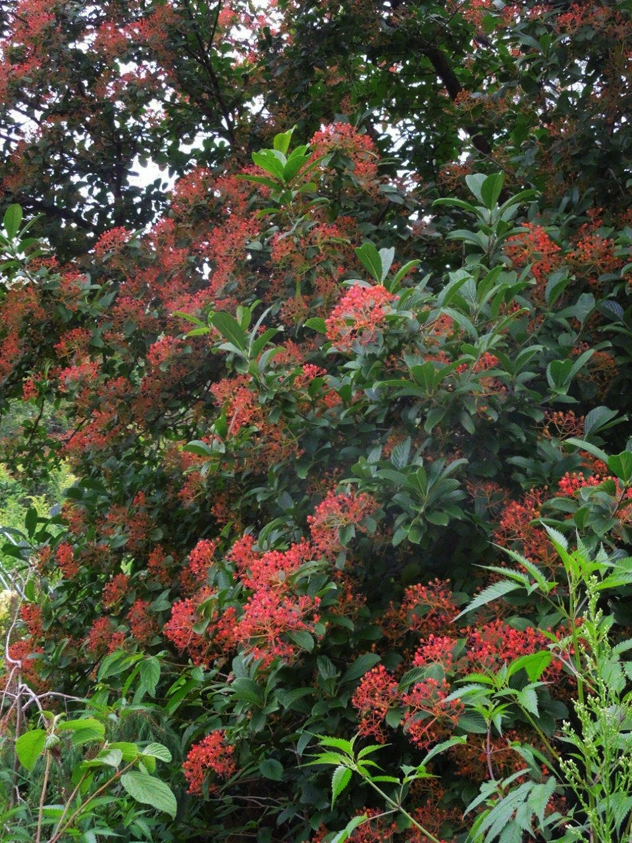 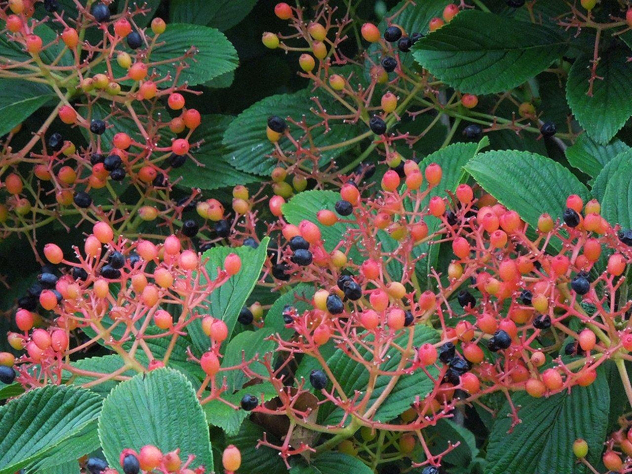 Architectural interest: There are several cultivars of Viburnum plicatum var. tomentosum (Doublefile) available in local nurseries and all are resistant to the viburnum beetle. As the doublefile habit is horizontal branching, the blooms and fruit appear all along the limbs creating a very distinct pattern that adds strong architectural interest to the garden. ‘Maeriesii’ has large flowers up to 1-3/4 inches in diameter, raised on a 2-1/2 inch high peduncle that brings the flowers above the foliage. ‘Maeriesii’ was killed in Iowa after being exposed to minus 20 to 30 degrees while the cultivars ‘Shasta’ and ‘Shoshoni’ survived. ‘Shasta’ is considered hardier and was introduced at the U.S. National Arboretum by Don Egolf’s breeding program. It is a broad, horizontal-branched shrub, 10 feet or taller and much wider. The abundant white flowers are followed in July by bright red fruit maturing to black fruit. I plan to plant this shrub next year. ‘Shoshoni’ is one third to half the size of ‘Shasta.’ The parent plant reached a height of 5 feet by 8 feet wide after 17 years. It’s a perfect choice for a smaller garden or to include in a flowering border. ‘Maeriesii,’ ‘Shasta,’ ‘Shoshoni’ and Viburnum ‘Summer Snowflake’ are the most striking because of their horizontal branching. If you want to make a statement in the garden try one of these!  I planted Viburnum ‘Summer Snowflake’ about 10 years ago and for a while it was my favorite shrub in the garden up until last year, when we had a severe drought and unbeknownst to me the plant was stressed. Several limbs died and this year I had to cut the plant down to the ground. Canker disease strikes in years of drought and if I had known that I could have watered it. The plant has not given up the ghost: a new 2-foot lead  has appeared at the base and I will be patient and wait for the shrub to regrow. A friend who had the same problem reported that her viburnum had completely regrown in four years. 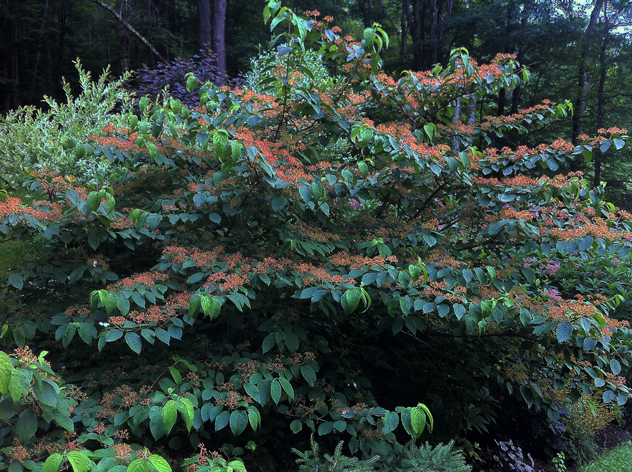 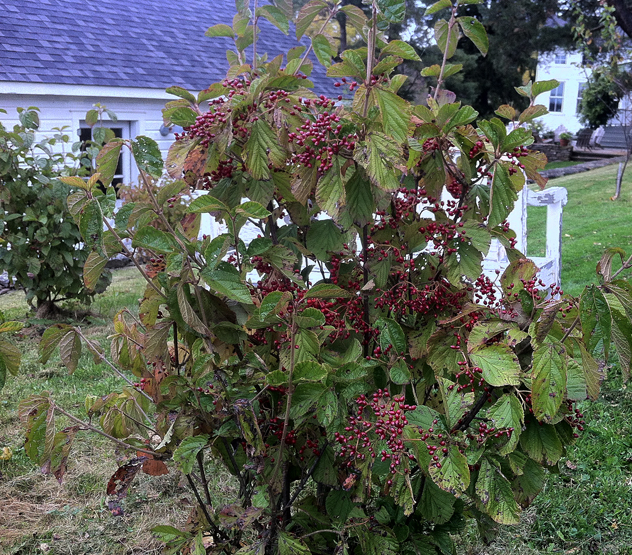 In recent years it seems like many plants are under threat from the newly arrived pest to that of disease. Luckily the genus viburnum is a large diverse species and we have several options for planting the hardiest and most disease-resistant plants in our gardens. Donstathamblog.com

V. farreri, fragrant viburnum (except ‘Nanum,’ which is highly susceptible)

Most resistant to the viburnum leaf beetle:

* Based on observations at the VanDusen Botanical Garden, Vancouver, BC, Canada, by Carolyn Jones

12 Responses to The Allure of Viburnums