Around the 1870’s bluestone quarries were booming in the Catskills providing large cut slabs of slate for the sidewalks in New York, Washington DC, Boston, Toronto and many towns and cities in the northeast. My wife and I were waiting for friends outside a wonderful local pub The Bull and Garland in Hobart, NY the other evening, and we noticed we were standing on a massive piece of bluestone at the entrance to the pub. A large piece of stone is a quiet thing, it doesn’t shout out for attention, and yet it must have taken Bluestone Men, as stone cutters were called, days of labour to cut a piece this size 9ft by 7ft from the quarry using simple tools, and then hauling it out with horses and transporting it by cart and eventually positioning to where we now stood.
These days its more usual to work with smaller pieces of stone for paths and terraces, and while they look good they are not as magnificent. When deciding what I wanted round my 1840’s farmhouse I chose a mason who quarried his own stone and for the path around the house I chose 4’ft wide by 3, 4, and 5′ ft long pieces with ‘natural cleft’, meaning that the fossils and ripple affects of water that made an impression on the stone as it was being formed, are still visible. My paths are perpendicular to the house allowing for flowering borders on either side. Later I made a more rustic path with fieldstone found from a fallen wall. I planted Woolley thyme between the cracks and put down scree or chicken grit which thyme loves.

This spring we decided to expand the natural fieldstone path making a larger area that joins up to some stone steps that lead up to the chicken coop. By enlarging the shape of my fieldstone path the lines of the paths steps and borders now make more sense. (See before and after shots.) Much of the design of my garden has happened liked this in fits and starts. I tend to make an inroad into a new area, and then walk away and come back later with fresh ideas. This slower approach allows me to relate to what’s there and over time problem solve any aesthetic/design issues. Of course the fieldstone thyme path is not finished. I am already thinking about trying some lavender. With all the stone and scree I now have the perfect conditions. Onwards! 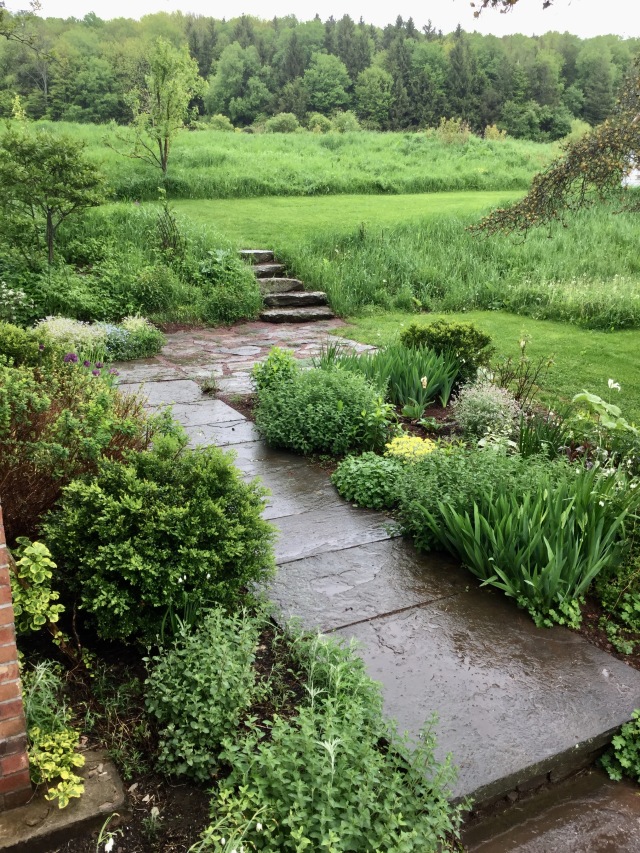