Most perennials only bloom for 10-14 days. I am always looking for perennials that have a long flowering time. I have found a few that really produce flowers for several months. The top plant on my list is Astrantia- Masterwort. It’s a meadow plant that can be found in many parts of Europe. There are three types, each a different color and habit. Astrantia major is a white flowering variety and though it says in most books it reaches a height of about 2’ feet that was not the case with  me. Having had the plant in the garden for about six years, mine have grown to about 3 ½- 4’ feet. It’s the tallest variety. I have a pink one that is called Astrantia M. Roma which has hybridized with Astrantia major and is a slightly paler pink than the original one, but just as tall. The third Astrantia m. ‘Claret’ is a very deep wine colored and stays relatively small about 15”- 18” and blooms much earlier. Astrantia Major pretty much bloom all summer and if I cut them back in August- they just keep flowering. 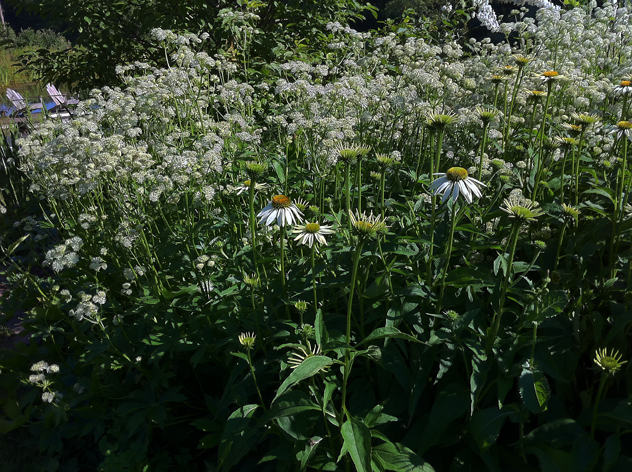 Astrantia Major in the border with Echinacea White Swan

The other wonderful long lasting perennial is Knautia Macedonica – pin cushion plant which has dark crimson flowers that resemble Scabiosa on curved stems. Grown about 48’ but mine have only reached about 3’ feet. 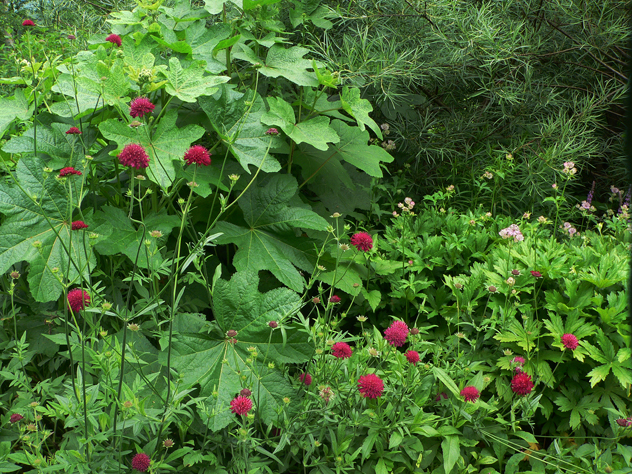